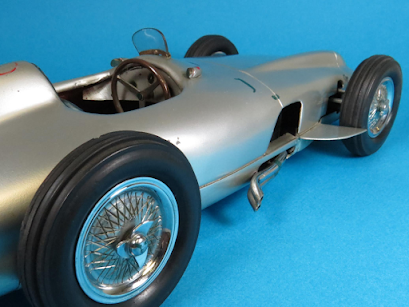 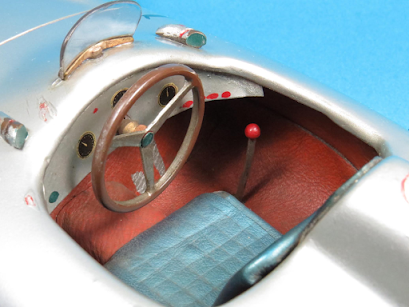 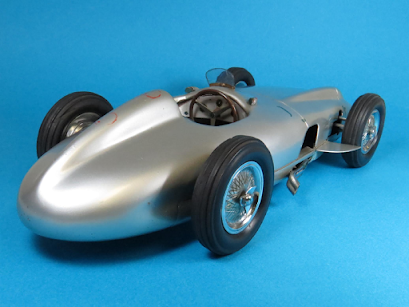 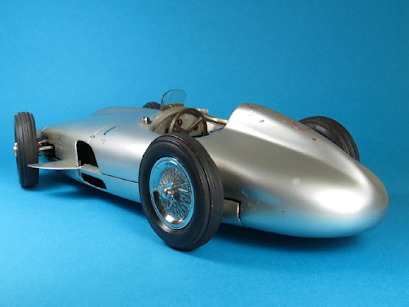 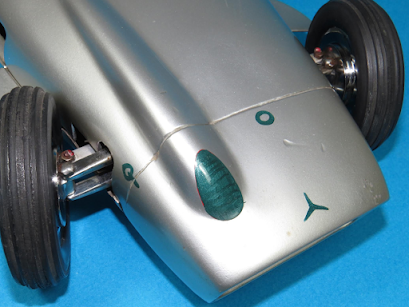 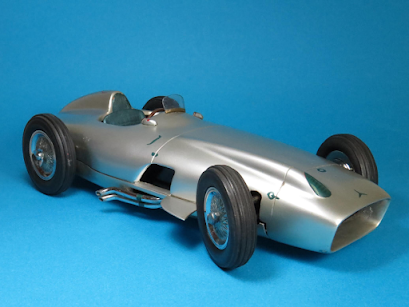 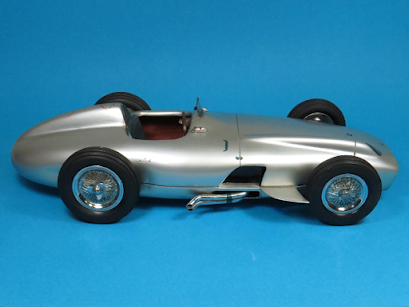 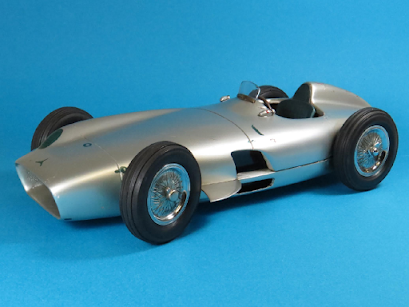 This model represents a significant piece of automotive modeling history, built by one of the best of the 'old guard' of model makers. It defines the term "old world craftsmanship," and is certainly exceedingly rare.

It is a very early Michele Conti piece, and is a true one-of-a-kind model. We recently purchased this model from a collector in Europe. The model is one of Michele Conti's very early works, constructed in the mid 1950's. The body shows his skill as a metal fabricator with its compound curves and hand formed vents, and that the model still remains solidly constructed....it was built to last. It features some wonderful detailing in areas of the brakes with simulated suspension, chrome plated exhaust pipes, various metal fittings, and leather trimmed cockpit. The front wheels are posable left and right. The wheels show Conti's progression in how he replicated wire wheels in the early days of his craft. They are formed aluminum discs which were then painstakingly hand engraved and painted in to simulate the wire spokes. The model has a very mild patina as expected for an early piece of its age, and the paint is in remarkably good condition showing very little wear as are the delicate hand painted   blue markings.  With its lack of racing numbers and various blue hand painted markings  we believe that Conti built this model to simulate a prototype W196. This piece is being offered in original unmolested condition. It is signed on its underside  Conti. Mi.

In the early 1950's Conti gained his full scale training as an apprentice at the well known body manufacturer, Stabilimenti Farina, which employed craftsmen who created shapes principally by hand. His father was also employed there as a specialist in assembling doors, hoods, and trunks of cars. When Stabilimenti Farina closed their doors in 1953, Michele along with his father was immediately hired by Pininfarina. It was at this juncture, during his free time and evenings, that he started what would eventually become his future full time career of building custom, scale automobile models.  Because of his reputation, craftsmanship, and dedication to realism, many of the auto manufacturers entrusted Michele with actual factory drawings from which to build his creations.

His early models were made from wood, which then evolved into aluminum, and then copper and brass. Ultimately, he used similar materials to those used in the construction of the full scale cars, in order to recreate the realism of the original cars.

The bodywork was shaped over a scale wooden body buck, the interiors were reproduced in upholstery materials, including leather, and the tires were cast from rubber from miniature molds he made of the originals.

On May 18, 2003 , Michele Conti's achievements were formally recognized at the 2003 Reading Ferrari Concours d'Elegance. His son, the late Maurizio Conti was in attendance to posthumously accept the 'Enzo Ferrari Hall Of Fame Award' for his late father.