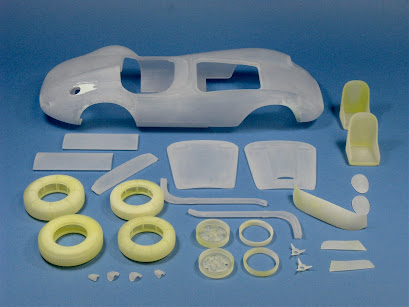 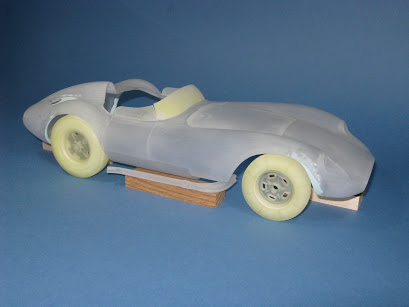 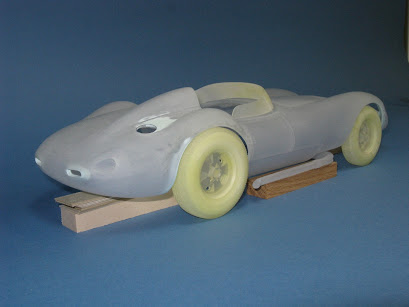 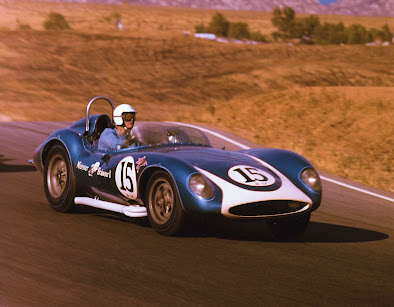 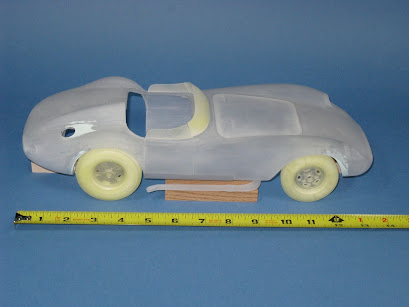 Price: $ To be announced.

The front engine Scarab's (Mk I and Mk II) are considered by automotive historians and most enthusiasts, to be the best looking sports racing cars ever built. They also boasted very formidable performance to match their looks.

If you're familiar with these gorgeous race cars, then you probably know that they were the brainchild of Lance Reventlow, the young aristocrat who was a direct    descendent    of    both
E.F. Hutton and F.W. Woolworth, but did you know these following bits of Scarab trivia? The body was the first 'professional' design drawn by Chuck Pelly who was then only a 19-year old college student. Pelly later went on to run BMW Designworks in California. The paint work was done by none other than Von Dutch. "The crew that built the Scarab reads today like a Who's Who of post-World War II American racing." (That quote of the "Who's Who" is from an article written by Michael T. Lynch and Robert T. Devlin.)

These will be the first large scale Kits ever produced of the front engine Scarab's, and are being made with the approval of Scarab Motorsports, LLC, whom we have closely worked with. (Note: CMA was and is the first model company to create large scale Scarab models and kits working with Scarab Motorsports).  As per our usual research method, we have gathered much information from one of the real Mk II cars, and many hundreds of private archive historic photos from the years when they originally raced; 1958 through 1963. A huge amount of time has gone into researching these cars and making the parts.  As with ALL of our CMA editions, these will be Historically accurate kits. They will be highly detailed curbside kits - no opening panels, but will still feature a wealth of detail. We are making all of the parts and various details to be able to offer both Ch. No. 002 and Ch. No. 003.  Different hoods (003 has hood scoop), and numerous other Historically correct detail differences between the two cars.  And......a few extra surprises as well.  We would have listed these details, but due to some rather unscrupulous individuals with other model companies we will not list the information until a later date.

There will be two - or three kits to choose from, and some of the kits will offer choices of versions to build. The versions will be announced when these kits go into production. We will also be offering the correct colors of custom mixed paints for each version in jars and spray cans!

The kits will be made of high grade polyurethane resin, with photo etched metal parts, the tires will be soft black urethane which perfectly simulates rubber, but has the advantage of being more durable. Decals will of course  be  very  high  quality.
Comprehensive instructions to guide you every step of the way are naturally part of the package. Signed numbered certificates will also be included with each kit. NOTE: All kits will be limited edition with no more than a total of 250 made for worldwide distribution.

The philosophy behind all of our CMA kits is simple. Do it right or don't do it at all; quality and accuracy are paramount. To those enthusiasts who are not familiar with CMA, we are world renowned as a maker of exceptionally high quality, superbly detailed large scale models and kits for serious collectors. We do not over produce any edition; and for each, we place an extremely strong emphasis on getting the body shape just right along with incorporating excellent detail. We go to great lengths with our research to make certain our CMA kits are truly historically accurate.

There is No other manufacturer of either plastic kits or diecast models in any scale that can make this claim. Where all other manufacturers (large and small) cut corners, make mistakes and leave off important details and produce in the Orient - we do not.

The Art of Historically Accurate models.